A DIY Kitchen Remodel: The Journey to the Dream Kitchen

DIY isn't just something for other people or a board on Pinterest that you will never make reality! When our reader Adam Polo found himself falling in love and moving across the country to begin their lives together he took DIY to a new level and remodeled his kitchen to sell his home and he's got some advice on how you can do it too!

We never know where life is going to take us. Some of us stay in the towns we grew up in forever, some of us find our homes somewhere else and some of us find ourselves moving like gypsies. But regardless of where, picking up and moving requires a lot of work, sometimes including putting your home on the market. When you sell your home you want to get the most out of it but that can mean putting work into it before hand. That’s exactly what homeyou reader, Adam Polo, a network administrator from New Jersey had to do when he fell in love with a woman from Oregon and they decided to begin their lives together in Oregon. In order to get his home ready to sell, he knew he had to get the thirty year old kitchen and foyer up to date. He decided to take on the project himself and the results were incredible. I got the chance to ask Adam a few questions about the kitchen remodel and his experience. Hopefully it will inspire you to take on your kitchen project, whether you, like Adam, decide to DIY it or have us give you a hand!

Where did you get the drive to take on this project?

Adam: I grew up watching This Old House on PBS. Home improvement projects always interested me. It wasn’t until I was in my 20s when I owned a condo when I completed my first project. It was a simple repair of a screen door. It was a big deal for me at the time as it was broken for a while and I didn’t have the money to hire someone to come fix it. After I was able to repair it, I had this tremendous feeling of accomplishment. As the years went on I took on bigger and bigger projects in my own home as well as those of my friends and family.

What made you take on the kitchen specifically?

Adam: My house is 30 years old and everything in the kitchen was original except for the refrigerator. The floors was ugly and the countertopss were damaged. The oven didn’t work very well and the garbage disposer stopped working. I’ve been meaning to do something about it but the project seemed really daunting so I kept avoiding it.

So I needed to rebuild the kitchen but keep the costs as low as possible to maximize the return on investment. Hiring a contractor would have been the quickest option but definitely more expensive in the short term. So I opted to do the work myself using materials I could get at the Home Depot.

Was money the only factor? Why do it yourself?

Adam: Basically cost was the largest factor. Another important factor was the ability to hone my skills for home improvement projects in the future, but that really wasn’t as important as keeping the costs down. Because I’m looking to sell the house right away, I need to focus on getting the highest possible return.

Have you ever taken on a remodel project of this size before?

Adam: Never have I taken on a project of this scale. One of the design elements of the new kitchen was a consistent floors from the front entrance, through the hall, and through the kitchen. This meant remodeling the foyer, powder room, coat closet, and kitchen all at the same time.

That is a big project to take on! What were the things you knew you wanted from the new kitchen besides the consistent floors?

Adam: I wanted a little better functionality, and updated look, and a calmer feel. The previous kitchen had a lot of browns, yellows, and reds which to me feels more like an angry atmosphere. The colors I chose here are a combination of beiges, whites, and greens. I think it gives the kitchen a calmer feel to it. The tiles, countertops, and backsplash are more current with the times. Moving the dishwasher allowed be to put cabinets closer to the stove for pots and pans. The under-counter mounted sink increase the depth of the sink and also allows for more countertop space.

That’s a lot of awesome changes! How long did it take from start to finish?

Adam: A little more than 4 months.

What part of the project was the most difficult to accomplish?

Adam: I would have to say the floors. In a house this old nothing is plumb, level, or square anymore, and the floor is no longer flat. It took a lot of effort over several weeks to get the floor flat and level again. It is now firm and feels solid under my feet.

You had a lot of big ideas for your remodel, was there anything you had to sacrifice from what you originally had in mind?

Adam:My original plan called for the removal of the wall between the kitchen and dining room and building an island. I was also looking to add under cabinet lighting and recessed lights. Time and budget would not allow for such a large redesign, so I had to settle for keeping the existing layout.

Adam: If I were to hire someone for something other than the countertops, which I did have professionally done, it would be the floor since that was the most difficult and time consuming.

I absolutely loved the back splash you installed, it was by far my favorite detail! What is your favorite part of the remodeled kitchen?

Adam: I really like the countertops. My old one was yellow laminate and was quite ugly. The new one looks so rich but was fairly inexpensive.

What would you do differently next time?

Adam:I think I would go with a slightly different cabinet layout. And I’d probably start sooner so I’d have time to build that island I originally wanted.

What advice would you give to someone thinking about doing a project like this?

Adam: Safety first! Safety glasses, masks, gloves, knee pads, and proper clothing will save you from ending up in the emergency room.

Research anything you’re not sure about. Take your time. Don’t be afraid to screw up. Take the extra steps to get exactly how you want it, even if it means ripping it out and doing it again. Understand that while TV shows and videos will show you how to do something, they did edit out all the screw ups and disasters to make the job look like it went perfectly. It didn’t, and neither will yours, so don’t be discouraged when difficulties arise.

Above all, enjoy it!

If you can take anything away from this beautiful kitchen remodel, take away the knowledge that you can do it! DIY isn’t just a thing for other people or a Pinterest board you never make reality. That kitchen you’ve been dreaming of? Make it happen! That bathroom oasis you want? Make it a reality! And whether or not you chose to stay in your home it will bring value in the selling and the memories you make in your home! 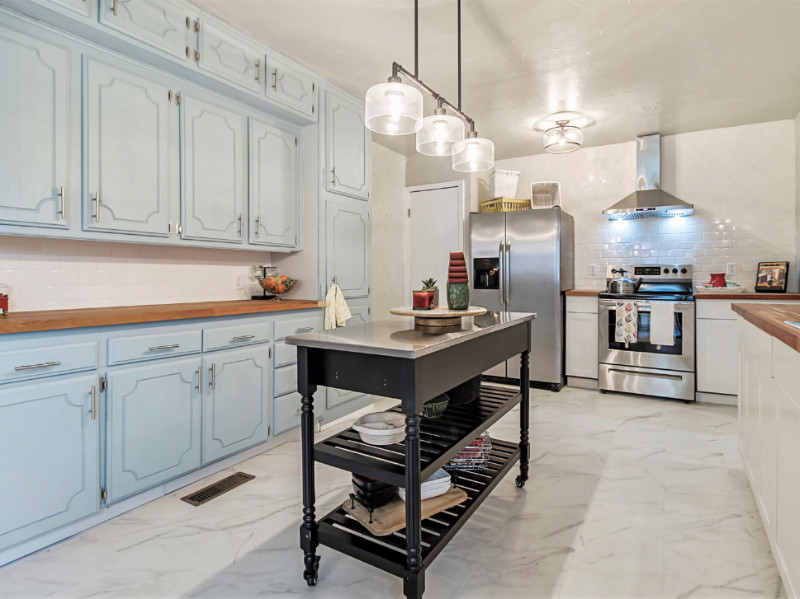